Photographer, Christopher Rimmer’s latest project entitled, Sign of Life, documents two abandoned diamond mining towns, Kolmanskop and Elizabeth Bay in south western Namibia; both towns are slowly being buried by the constantly shifting sands of the surrounding Namib Desert. The award winning photographer employs the town’s decaying buildings as a visual metaphor to explore the tragedy of lost significance and the ultimate futility of human endeavour. He talks to Sean Bateman. 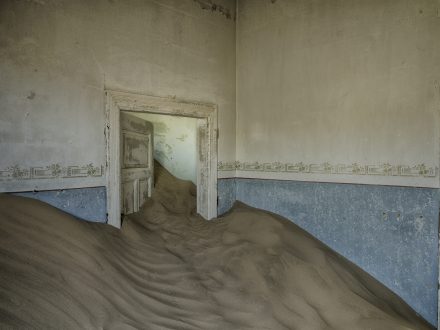 Kolmanskop and Elizabeth Bay were established as a result of the discovery of diamonds in southern Namibia at the beginning of the 20th Century when the country was a German colony known as German South West Africa; as the revenue from diamond mining poured in, the colonists furnished the towns with substantial and high quality domestic, civic and commercial buildings, all constructed in the Germanic Baltic style.

The town of Kolmanskop boasted a hospital with the only x-ray machine in the Southern Hemisphere as well as a casino, gym, skittle alley and dance hall. Not to be outdone, the residents of Elizabeth Bay built their own opera house.

A pipe line which ran dozens of kilometres through the desert supplied Kolmanskop with water from the coast. Legend has it that diamonds in the region were so plentiful, the precious stones could be seen glinting on the dunes during nights when the moon was full. Even today, the entire area is a restricted zone and entry is strictly controlled by the Namibian Department of Mines. 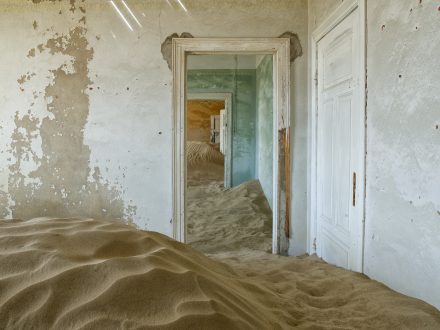 Eventually what seemed like the never ending supply of diamonds was exhausted and both towns were slowly de-populated following the discovery of richer diamond deposits in the south of the country. A few straddlers remained but by 1951, both Kolmanskop and Elizabeth Bay were left to the restless sands of the Namib.

Rimmer’s photographs, all taken inside the buildings, the interiors of the buildings completely overwhelmed by massive volumes of sand which pours in like floodwater through open doors and windows, filling some of the rooms to ceiling height.

No building is spared; a child’s bedroom is swamped by a slow moving tsunami of choking, white sand which pours in through an open window before progressing to other rooms in an unstoppable and insidious flow.

It is a nightmarish vision, although when viewed in its entirety, which comprises thirty, large scale prints, Rimmer’s work also possess a baffling kind of beauty. The textures, angles and colours of decay; buildings falling apart and of a world lost, are gorgeous and graphically impressive.

Rimmer recalls a lifelong fascination with the material culture of the past indeed, most of his imagery deals in one way or another with his formative years as a British migrant growing up in South Africa during the 1970’s under Apartheid.

He began taking photographs as a teenager and from an early age, his photography revealed a sophisticated insight into his environment that belied his youth. His work was published in South African magazines whilst he was still a teenager and his large monochrome portraits of the last remaining tribes of southern Africa from his critically acclaimed, Spirits Speak series, saw him shortlisted for the prestigious Black & White Photographer of the Year award in London in 2011 and again in 2012. 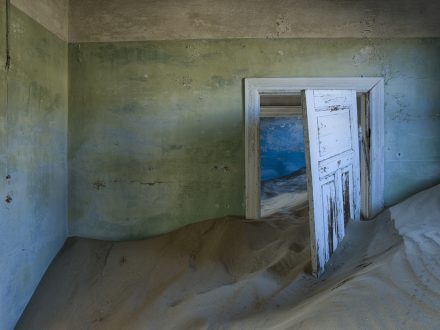 Born in Ormskirk in rural west Lancashire, Rimmer recalls his childhood obsession with objects of the past, ‘Our neighbours in Ormskirk had a World War Two era air raid shelter buried under a mound in their garden. My pals and I dug out the entrance and I vividly recall the concrete steps leading down into the dark interior now flooded with water. Even as a child  I was impressed that a structure like this could be built as a reaction to such a monumental but relatively short event and then be no longer useful immediately afterwards,  yet it remained in the landscape slowly changing over time until it was re-discovered by us.’ 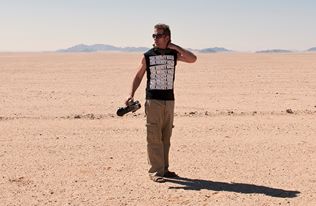 Christopher Rimmer in the Namib Desert in 2013. Pic by Nico van Rensburg.

Sign of Life weaves a visual narrative founded on the premise that everything mankind constructs is useful for a limited amount of time only. Rimmer says it is what happens afterwards that he finds interesting both visually as a photographer and also as a psychological analogy to human existence itself.  He emphasizes the fact that the people who made up the communities of Kolmanskop and Elizabeth Bay could not have foreseen the towns being abandoned and overwhelmed by the Namib Desert, all within fifty years. 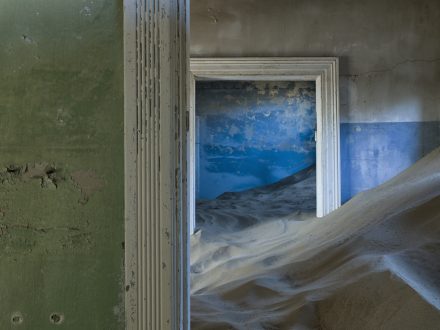 ‘The substantial nature of some of the structures built by these people and the enormous effort it must have taken in such a hostile environment, reveals this truth,’ he says,’ these people thought these town would be here forever, yet despite this, the forces of nature have made a mockery of their aspirations.’

Rimmer is convinced that If we have the psychological courage to face the fact that nothing lasts forever and that in the end only time endures, the realisation can be both psychologically liberating and life affirming at the same time.

Christopher Rimmer’s Sign of Life is a powerful body of work that expresses this duality in an elegant and graphically engaging manner.

Raised on South Africa’s Witwatersrand during the 1970’s, British born photographer, Christopher Rimmer, became fixated with the landscape of his…

The beach-loving bulls of Pondoland – in pictures

Why are women's nipples still regarded as obscene?

Christopher Rimmer feared the nipple police would be out to get him. But the critically-acclaimed Melbourne photographer went ahead and…